Directions for filling and pie assembly: 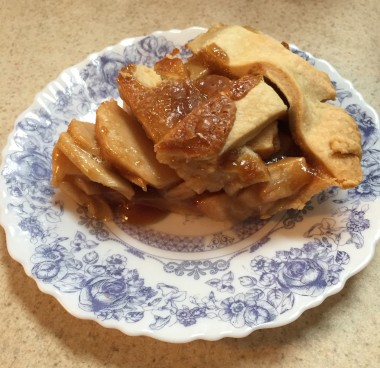 The Science of Apple Pie:

Generally speaking, gluten is made from two proteins known as gliadins and glutenins. These proteins create a gluten matrix when they are hydrated with cold water and manipulated physically (kneading dough). This initial step allows for hydrophobic reactions to take place. Further, these applied forces allows for the two gluten proteins to absorb water and partially denature or break down. These broken down proteins react further and allow strands or polymers to form. These polymers undergo hydrogen, disulfide, and hydrophobic interactions and form a viscoelastic gluten matrix which is able to capture and hold gas.

When adding fats, like butter, to the flour proteins, this disrupts the process of forming the gluten matrix. The solid shortening literally “shortens” the length of the gluten network strands, allowing for flaking of crust and dough layering instead of a fluffy bread consistency. The butter was cut into pea-sized chunks to allow for the fat to melt in pockets throughout the dough and give flaky layers to the crust.

When cold water is added to the flour and butter, this allows for separation of starch granules and prevents lumps and unequal swelling of the starch. The salt helps control the gluten formation so that less occurs. The sugar competes with the starch for water absorption, which allows for less water for gluten formation. Overall, too much gluten formation is undesirable for a pie crust because pie crusts should have flaky layers instead of fluffiness like bread.

The dough is chilled before it is rolled out mainly to maintain a flaky desirable crust. Further, this allows the gluten strands time to settle down and relax and makes the pastry dough easier to roll out.

Simply put, starches thicken at 140 degrees, but starches high in amylose such as flour, need to be brought to a boil and then simmered in order to cook off all of the starch flavor. Final thickening occurs at 205 degrees. If the heat isn’t turned down after boiling occurs, the starch molecules may be too disrupted and may lose their ability to trap water and thicken. This process creates a desirable color and texture for the apple pie filling.

When the pie is cooked a process called non enzymatic or Maillard browning occurs, where a carbonyl group of a reducing sugar reacts with heat and an amino group of an amino acid. This reaction forms a melanoidin polymer which is responsible for desirable brown color, smell and caramel flavor of the pie. As the pie is heated in the oven the browning process occurs. After the initial cooking at 425 degrees the oven is turned down to 350 degrees to finalize the golden brown coloring of the crust after the pie filling has been mostly cooked.

Don’t let any of this information scare you! Who would have thought so much went into a simple apple pie. Maybe not so simple anymore…but that doesn’t mean it isn’t delicious!